Welcome to my blog - my ramblings about trying to find healthy, affordable gluten free food in St. John's, NL.
Despite being gluten free, I love to try new products and am always interested to hear about new places to eat.
I try to help the environment and purchase organic products where possible.
Enjoy :)

Last week I noticed that Costco was carrying the Post Cocoa Pebbles gluten free cereal. I was a little surprised because I didn't even think they were sold in Canada yet!

I had tried them a couple times while I was in the US and while they do not exactly rank on top of the nutritional scale - they do have some perks.

1. They taste yummy - light flakes of chocolate with milk - how can you go wrong??
2. They are a "mainstream" cereal so they are fortified with vitamins and minerals that a normal gluten free cereal wouldn't have
3. They could be used to make squares / desserts (I'm thinking something like a rice krispie square)
4. They are very affordable - there was a $2 coupon off the box this week so it rang it at $6.99 for the 2 giant bag Costco version.
5. Kids with Celiac can have "normal" kid cereal for a treat

I personally find these one of my guilty pleasures as I am quite a chocolate junkie - anyone else seen these around outside of Costco? 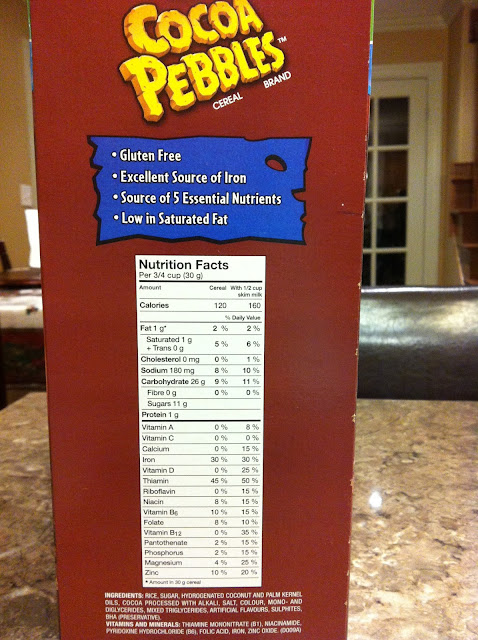 Email ThisBlogThis!Share to TwitterShare to FacebookShare to Pinterest
Labels: cereal